The Beginning of Fountain Heights

Fountain Heights is a historic neighborhood located in Birmingham, Alabama.  Separated by Enon Ridge and Evergreen neighborhoods by I-65 and 17th Avenue on the north; from the Central City neighborhood to the east by 19th St. N.; from the Five Points South neighborhood by the Railroad Reservation; and from the Smithfield neighborhood to the west by I-65, Fountain Heights also includes the former area of “Little Korea” or “Newmongo” north of 8th Ave and the NW section of downtown Birmingham which includes the Civil Rights District surrounding the Kelly Ingram Park.
The beginnings of Fountain Heights can be traced to George C. Kelley.  Mr. Kelley was born in Wilmington, North Carolina on July 30, 1847.  By 1881, he had become a resident of Birmingham, Alabama.  He built a building devoted to the mercantile trade on Second Avenue, where he established a wholesale and retail hardware business that extended throughout the South. In 1882, he purchased ten acres in the Fountain Heights area and built a beautiful residence there.
Assistant Professor Pamela King of UAB has performed extensive research into the homes at Fountain Heights and tells of her project in the film below.

The abandoned homes in Fountain Heights are some of the oldest in Birmingham. The University of Alabama at Birmingham (UAB) Assistant Professor Pamela King has surveyed its historic buildings. She says the neighborhood “has some histories that are absolutely unique in the city, so when it’s gone, it’s gone.”

According to King, it began in the 1880s as a Jewish community. Jews eventually migrated out, and by the 1940s, it was a working-class white neighborhood. Middle-class blacks began to move into the area, crossing over from Smithfield.

“I think of it as the frontline of Birmingham’s desegregation,” says King. “And there’s a huge wave of African-Americans who move in right that year. I interviewed some and … by 1969, 1970, according to Birmingham Census and Records, it’s 100 percent Black.”  Around this time, construction began for Interstate 65. It cut directly through Fountain Heights and the neighboring community of Enon Ridge.

By the 1970s, Fountain Heights was surrounded by interstate on three sides and property values declined. Middle- and upper-income black families began to leave the area. John Colón, Birmingham’s community development director, says these outward migration patterns occurred throughout inner-city Birmingham.  “We’ve lost a third of our population essentially over the past 50, 60 years,” he says. “And as folks left the city, they left sort of a surplus of housing.”

In communities like Fountain Heights, residents look forward to change.  But with each vacant home that’s demolished, they risk losing touch with the very history that led to the problem. 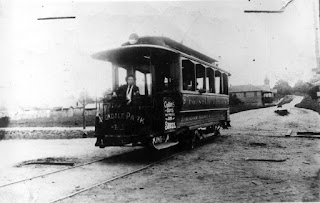 In the early 1900s the streetcar carried passengers from Fountain Heights to Avondale and back. 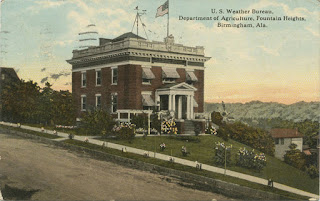 The early 1900s also saw the opening of the weather station for Birmingham that remained in Fountain Heights for over 40 years.
One of Fountain Heights biggest claims to fame was the fact that it had a weather station for Birmingham and the weatherman, E. C. Horton even broadcast from there.   Horton was marooned in his weather observatory at Fountain Heights in a disastrous sleet storm on February 5, 1923, without telephone communication with the outside world. He made his readings by candlelight while the city of Birmingham awoke under a solid sheet of ice. The whole city was without electricity and was forced to return to kerosene lamp and old-fashioned candles. Magnificent oaks and tall pines went down as if hit by a cyclone according to The Birmingham News. 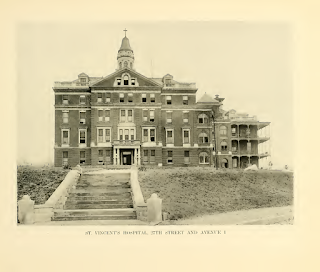 Henry F. DeBardeleben, the founder of Bessemer, had his home in Fountain Heights. This mansion was later the start of St. Vincent’s Health System. The first temporary location was established in DeBardenleben’s home in 1898 by the Sisters of Charity Hospital Association. “Groundbreaking for the facility shown in this photograph took place in March 1899, and this permanent location opened on Thanksgiving Day 1900. Known as Mount Saint Vincent, the hospital was the first in Birmingham to have x-ray equipment installed”.

A Jewish Settlement was established in Fountain Heights 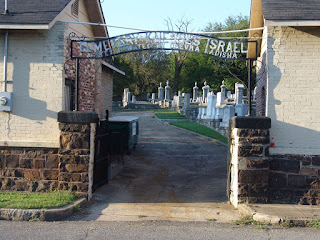 A Jewish settlement extended from near 13th Ave and then to the West.  “Hidden in plain sight”, the Knesseth Israel/Beth-El Cemetery, the oldest Jewish cemetery in the city, is situated at the top of Enon Ridge in the Fountain Heights neighborhood of north Birmingham. Modest wooden houses built during the 1930s line the cemetery on two sides.  Center Street runs through the middle, with Knesseth Israel on one side and Beth-El Cemetery on the other. A strip of woods screens the peaceful grounds from the sounds of cars and trucks roaring by on I-59, constructed during the late 1960s as part of Eisenhower’s urban renewal plan. 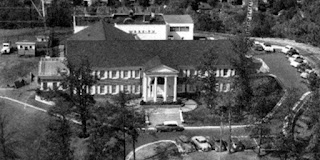 WBRC station actually began broadcasting from Fountain Heights as a radio station in the late 1920s.  WBRC AM 950 operated with a power of 10 watts. The transmitter facilities and studios were in the home of J.C. Bell in Fountain Heights, and WBRC-AM had a broadcast day of only four hours.  WBRC actually stands for Bell Radio Corporation.

One of Birmingham’s historic fire stations, No. 11, was built in 1910 in a commercial style, in contrast to later suburban stations. The garage door sat on the left side of the building next to a central entrance door. A brick belt over the office portion of the building and an awning over the doors are the only decorative elements in the building.

There are many more stories connected to the Fountain Heights Community and it is sad to see its deterioration. I know progress is important, and we must have improvements on our Interstate system, but Birmingham has lost so much of its history that makes it a unique city. The destruction and loss of the Birmingham Terminal Station is and will forever be a disappointment felt by many. 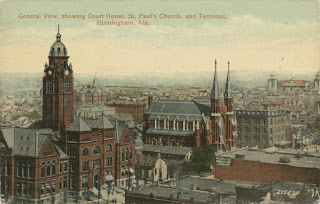 Jemison magazine of June 1910 volume 1, No. 2 stated that the “Terminal Station cost $2,000,000 and had a wonderful effect on property values on Second, Third, Fourth, Fifth and Sixth Avenues, East of Twentieth Street.” Can you imagine what it would cost to replace such a property today?  Unfortunately, the Terminal Station has long been demolished in the name of “modernization”.   Imagine how wonderful it would be if we still had the terminal in conjunction with Railroad Park. 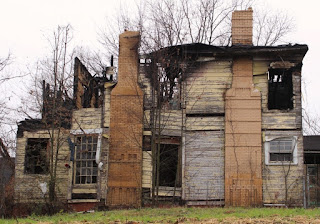 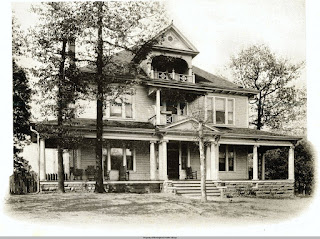 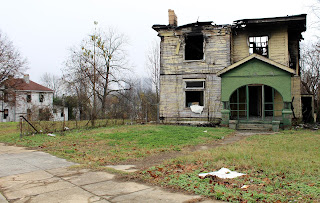 Not all of the houses in the Fountain Heights neighborhood is abandoned and/or neglected.  There are many well-maintained homes in the area, as well as, new builds. 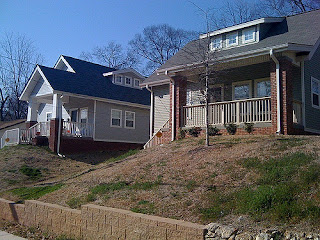 Over the last several years, there has been a renewed interest in the Fountain Heights neighborhood with many new builds that mimic the bungalows and Four Squares that were original to that area. Photo above taken from the following article:  https://birminghamview.com/online/2008/01/22/new-fountain-heights-homes-signal-revitalization/ 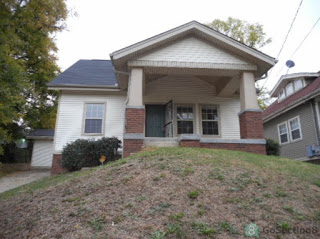 As is true of any long neglected and overlooked neighborhood, Fountain Heights will rebound into a thriving community only with the help of progressive investors.  With its close proximity to downtown and all the amenities and businesses that the downtown has to offer coupled with the easy access to interstates and major highways, the Fountain Heights neighborhood has a lot to offer.